A tribute to Zoey 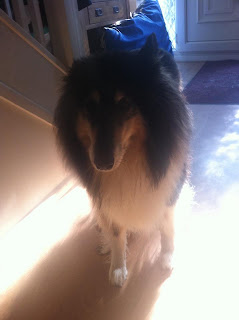 I haven't been awfully fantastic at updating my blog but it's been a busy few weeks. I thought I should add some pieces to the blog before I lose the momentum entirely!

I want to talk about some of the gorgeous animals I have met lately...I want to talk especially about Miracle, Claire's beautiful horse who has really truly been a little miracle indeed..but I feel she deserves her very own blog entry so I will save her story for when I have the time to properly dedicate to detail everything :)

Tonight I want to talk about Emma...an absolutely beautiful golden retriever...a former guide dog, Emma now lives in her adopted home of the last two years in Wallasey, Merseyside with her one in a million owner, Brenda.

Brenda contacted me a few weeks ago and explained that although Emma suffered with epilepsy, arthritis and allergies, all of those things were managed and under control and it was the tumours that had grown in Emma's legs and head that were making her very poorly now and at 12 years old, Brenda had been advised by her vet that the time to say goodbye may be imminent.

Straight away I told Brenda that I would do all I could with the Reiki healings and work with her to look for suitable flower remedies, homeopathic and herbal treatments that could help, but taking into account her age and the extremity of her illness, that I couldn't make any outlandish promises..but as always I would give my all to the healings and hope that we can help to make Emma stress free and comfortable in what may be her final days/weeks.
Brenda agreed, and having used Reiki with great benefits for herself in the past, was happy that if all we could do was ease her pain and keep her settled and prepared, then that, she said, was enough.

Brenda herself is a bit of a superhero...she (I hope she won't mind my divulging), is well into her 70's and is quite the local celebrity in her area...she keeps goats (one of whom I am also doing some healings with and will blog about later..) who provide organic, calcium rich milk from which she makes cheeses, chocolate and milk which is ordered specially, in particular for people with allergies. She has chickens and grows organic vegetables and makes up flower arrangements, hanging baskets, Christmas wreaths and heaven's knows what else for local garden centres and florists. I think Emma's temperament, patience and all round loveliness is a testament to the time and energy Brenda has spent on her since she adopted her two years ago.

I have been working with Emma now for four weeks: at my last visit, I was greeted at the door by what I thought at first was a new puppy!! She was excited, wagging her tail to the max and just a completely different dog to the listless, depressed dog I had first visited.
Brenda said she seemed to have known I was coming and waited at the door for me! She enjoys her healings and is such a good girl...she holds up her paw with the tumours and will literally keep it lifted for 10 minutes whilst I work on the area with Reiki.

I know when the time comes, I would like to be there with Brenda, but at the moment, we have a happy dog, still full of energy, still demanding her breakfast and evening walks.

Emma has melted my heart and the vet said on her check up visit last week that she has amazed him with how she is coping and dealing with the tumours. 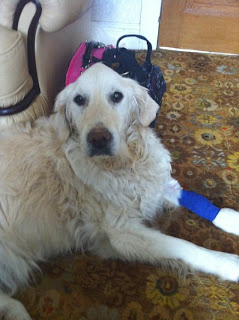 So, I thought it was time to step into the modern world and become a BLOGGER!! (There's something about that word that makes it sound rude! ha!)
So, having recently taken the big scary plunge to become a full time holistic therapist, working mainly with animals, the last few weeks have been scary/exciting/bizarre and along the way have met some amazing, beautiful animals and their lovely owners. My company, Silver Daisies has been featured in local press, and various pet and holistic magazines with some VERY exciting features coming up in my personal, hippy magazine of choice, Spirit and Destiny and the one my Mum is going to be most proud of...Lancashire Life magazine!! Surreal!

So tonight is mainly to introduce myself to the wonders of blogging (seriously - that WORD makes me laugh!!)

My next posts are going to be talking about some of the animals I have been working with recently and the brilliant, sometimes, humbling results we have seen.. and for now just a little piccie of me stealing a snuggle from my new and very beautiful client, Cav :)
Amy x

silver_daisies
A hippy in high heels and false eyelashes...have recently started to follow my dream of working as an animal healer and holistic therapist full time...I love my job more than I can say..I love the people and the animals that I meet and work with and learning something new every single day :)